Well hello. Normally I like to write these posts on Friday’s on account of I get home early but I went out of town last weekend and just ran out of time. So here we are, Monday evening. I’m almost at week 25 (HOLY MOLY how did that happen!?) but lets just recap week 24 anyway cuz it’s fun.

First off, I feel like my belly is growing every day. I’ve officially gained 15 pounds and feel pretty good. I have been getting some cramps still in my hips/calfs during sleeping time which keeps me up some nights but if that’s the worst of it, I’m ok with that.

I had a strange craving this week. It happened to be pancakes with french fries dunked in maple syrup. Strange or it could be the most amazing combo ever. Sadly, I did not get to indulge in this one…yet. I’ve also been craving mashed potatoes sauced with ketchup (or basically ketchup on everything), Culvers, salad of Cesar,  hamburgers (always), and CANDY. I guess you could say there’s a variety. Oh and always apples. Red apples.

ALSO, big news…Baby had his first Quarter Pounder with cheese. I mean, have you seen the commercials for this lately? That’s what started this whole craving in the first place…kudos to you McDonald’s marketers. My first QP was (in Fergie voice) “tasty, tasty.” The fries however were mediocre at best…forever a Wendy’s or Culvers fry girl. 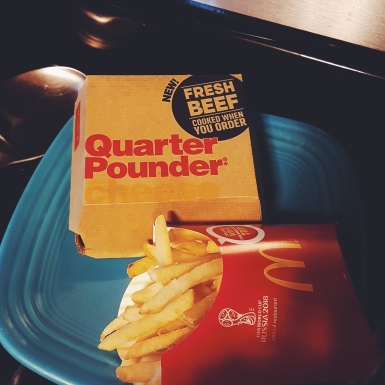 Processed with VSCO with f2 preset

Processed with VSCO with f2 preset

During week 24 I also whipped out the crock pot and made some delicious shredded chicken. You literally take 2 pounds of chicken boobs and put them in the crock with seasonings and a cup of chicken broth. Sam is weird and added cream of chicken but whatever, it worked. Then you just let that cook on low for 6-8 hours and shred it up. I used my chicken as homemade chicken burrito bowls and it was mighty tasty.

During week 24 workouts seemed super fun and I seem to be gaining some motivation again. I did a nice 7 mile run/hike at the state park and some super fun outdoor workouts including things like lunges, elevated push ups, hang power cleans, bent over rows and bench step ups. I also did a few workouts at the gym including low weighted wall balls, box step ups, push press, swing snatch and more.

There’s a turkey out there

I’ve been checking out Paleomg.com lately because she posts some fun workouts that are easy to do at home or modify if needed. I’ve also been making sure to take plenty of water breaks to catch my breath.

Baby also got to take his first road trip to Duluth during week 24 and experience mom’s driving for an extended period of time. There was some bad traffic and we almost got hit by a tire that flew off a boat trailer in front of us but other than that we sang a lot of songs and drank a lot of water. It was pretty boring. Duluth was a blast though! It was Grandma’s weekend and my sister’s boyfriend and friend were running the half.

Molly and I were the support crew and it basically felt like we ran also. The race started at the butt crack of dawn (6:15 am) so we were up and at em with the birds. Our goal was to see the runners as many times as possible and we saw them 5 times so I’d say that’s pretty good. One time we had to sprint 2 blocks to make it to them and I was so out of breath it was sad. But that’s OK because I’m running for 2.

I’ve never actually got to watch Grandma’s because I’m normally participating in it but this year was so fun. I actually really enjoyed being the support team and had no desire to be doing the run (I was afraid I’d get super jealous of every runner and end up super sad I couldn’t run-not the case). It was also incredible to see the elite runner zoom by. They are literally sprinting and it’s such a sight. Ok, enough about running.

Please excuse my scatter brain right now. There’s a lot going on. Sam’s cooking a pizza, Ruthie’s got zoomies, and I just really want some graham crackers with frosting.

I leave you with a funny picture of Ruthie.

Have an excellent night my friends! Someone have a margarita or Summer Shandy for me!